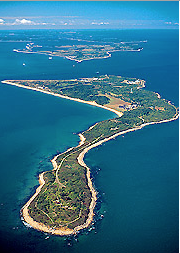 EDWARD FASZCZEWSKI  In the late 1950s at the age of 12, Ed Faszczewski moved with his family to Plum Island, where his father was a lab supervisor at the animal disease research center. They were among the first civilian families to live on the government-owned island, located east of Orient Point. Join us for this fascinating first-person account. of life on mysterious Plum Island.

Video of the Lecture